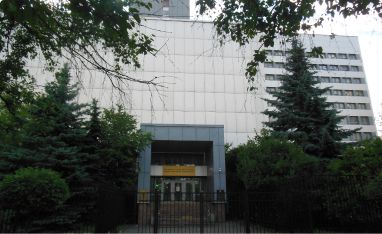 The Russian State Archive of Scientific and Technical Documents, located in Moscow, holds scientific and technical documentation concerning industrial development, patents, and personal papers of well-known scientists, scholars, inventors, and engineers. But perhaps the most interesting materials are those related to the Soviet space program, which includes not only technical documentation, but films, photographs, and audio recordings of the historic achievements made in rocket design and space travel.

The Archive possess a 5-story building of 2.5 thousand square meters where the documents are stored, and the Lab of Document Microfilming and Restoring. At present the construction of the 11-story administrative and technical building is in progress.

The RGANTD has special storerooms equipped with stands and shelves (for documents on tapes), automatic systems of monitoring the temperature and relative humidity, security and fire alarms. The RGANTD rooms store more than 300,000 units that reflect the activities of at least 180 entities of the space and war industries, of the scientific and technical complex of the country.

High professional skills of the RGANTD staff and its modern equipment allow computer restoration and processing of deposited documents. In the Archive, you can find answers to all your questions related to space exploration: from the date of the flight and the composition of the space crew to the technical drawing of the smallest bolts and nuts of the spaceship.

Work on a User Video Library is in progress (VHS, Betacam cassettes). Unique photo documents related to S. P. Korolyov and Yuri A. Gagarin have been digitized and recorded on an optical disk.

The Russian State Archive of Scientific and Technical Documentation has been known by several names since its beginning in 1974:

The Russian Scientific and Research Center for Space Documentation began in 1974 following the appeal of scientists, experts and advocacy groups to the leaders of the country. The respective Regulation of the Government was signed on April 30, 1974 and the State Center for Storing Space Documentation was set up. It was the only state archive with all types of documents related to the history of domestic rocket and space technology, history of space exploration, etc. which was committed to choose and store documents, maintain special conservation research. The stock funds of the Center included documents deposited by companies that took part in space activities, by mass media; as well as private archives of experts in rocket and space equipment, of astronauts; memoirs of scientists and researchers; materials that were compiled by the Center on its own initiative.

The Archives store documents of various types (completion reports on scientific, research, design works, films, photos, audio- and video materials, telemetric data) which allow to track the development of domestic astronautics for the period from 1930s till today, including the all major aspects of the domestic space program and stages of conquering space using automatic space vehicles, manned spaceships and orbital stations.

Facing the new reality, the RGANTD enlarged the document integration system to include all possible scientific and research materials from 20 industries of the country, from businesses of the State Committee on War Industry.

At present the Archives integrate documents from both military and civil entities which can be both public and commercial because the RGANDT priority is to store as many documents related to the history of domestic astronautics as possible.

In January, 1975 in accordance with the Regulation of the Government, the Center for Space Documentation was committed to take for deposition the materials of the Soyus-Apollo Program after they had been received from abroad and after their complete technical procession at film-, photo- and TV studios. As a result of implementing this task the RGANTD accumulated a substantial stock of materials within the framework of the EPAS Program: scientific, technical, administrative papers and film-, photo-, audio- and video documents - all in all, 10,000 units.

Special purpose teams were responsible for choosing documents provided by companies and businesses. The chairman of the head group that represented the Department of General Machine-Building was Mr. Yuri Koptev who is Director General of the Russian Space Agency (RSA) at present.

Among the companies which deposit their documents at the Archives it is worth mentioning such largest space businesses as the Energy Russian Space Center, the Baikonur Space and Launch Complex, the Scientific and Industrial Association named after Lavochkin, the Russian Space Agency and many others - about 100 entities, which are sources of integrating the space archives.

Documents received from companies and businesses are registered and then replenish different collections which can be accessed by researchers. Actually, wide public access is provided to thousands of documents that used to be deposited in different archives. The scientific and technical documents deposited in the RGANTD relate to the period of initial space exploration, launching the first artificial Earth satellite, first manned space flight, investigation of the Moon, circumterrestrial space, the Sun and solar system planets. Among them there are technical drawings and designs of the first geophysical rockets, the first super heavy N-1 carrier rocket, Moon orbital spaceships, spaceships Vostok, Voskhod, Soyuz, Progress, orbital station Salyut, etc. In the vaults researchers can find documents with approving signatures of S. P. Korolyov, M. V. Keldysh, V. P. Mishin, K. D. Bushuyev, M. K. Tikhonravov.

Of special interest there are documents that characterize the process of training astronauts before the flight.

The Archives store documents related to records registered for manned and automatic space flights including international programs Interspace and EPAS. Among them there is the Record Book of Yuri Gagarin, a citizen of Russia, on the first space flight in the history of mankind on April 12, 1961.

There exists fruitful cooperation between the Russian Space Agency and the RGANTD which forms the basis for depositing documents on international and domestic projects: for example, in 1993 the Archives obtained for depositing photo- and video-documents reflecting the preparation of the joint American-Russian crew for the flight of board the Discovery Spaceship in the Johnson Center for Space Research in Houston.

The Archives integrate documents reflecting the reaction of mass media on space exploration; one can find here a lot of private archives belonging to experts in rocket and space equipment, astronauts, or documents compiled by the RGANTD staff on their own initiative.

At present the Archive possess the largest domestic collection of space photos - more than 92,000 units.

In the collection there are photos embracing the period from 1907 to 1999. The Archive have been maintaining a chronicle of events from the very first steps in astronautics to date. There are some absolutely unique pictures of the members of the Interplanetary Communication Section with the Air Force Academy in Moscow: N. I. Kibal’chich, F. A. Tsander, N. I. Tikhomirov; one can enjoy photos of S. P. Korolyov when he was a child. There are many photos of the WWII period, of testing the Red Star gliders, the CK-9 glider designed by S. P. Korolyov, etc.

For the purpose of conservation, the photo documents on nitro stock are transferred to non-combustible triacetate film; there is a constant physical and chemical check of images; back-up copies of the most valuable documents are made, and the user fund is constantly enlarged.

As to film documents, there are more that 7,000 units. Included are the activities of the first R&D space companies: the Lab of Gas Dynamics, the Jet Movement Research Lab, the launching of the first artificial Earth satellite, preparation of manned flights, the first crew of astronauts.

There are more than 9,000 audio documents: speeches, interviews, cover stories, lectures, etc. Communication sessions "Board of the Spaceship - Earth" is of special value: you can listen to sessions with all space crews for the period from 1961 to 1993.

Since 1988 when the USSR Council of Ministers signed the Regulation that the Space Documentation Center (now the RGANTD) shall collect, store and publish memoirs of space veterans, more than 250 recordings have been made. A special biographical and retrieval database was created. Included are memoirs of V. P. Mishin, V. P. Barmin, Yu. A. Mozzhorin, etc.

The audio-collection (that includes communication sessions between the crews and the Space Flight Monitoring Center, meetings of State Commissions, press-conferences for foreign and domestic journalists, meetings devoted to special occasions, scientific seminars, memoirs of experts in rocket and space industry) is unique because it is complete and reflects the development of domestic program of manned flights starting with communication sessions between Yuri Gagarin and S. P. Korolyov and Gagarin’s Report on the Flight on Board the Vostok Spaceship that was made in Kuybishev on April 13, 1961 (it was published by the Archives for the first time in 1987) to the meeting of Directors of National Space Agencies on the results of launching the first Zarya Element of the International Space Station in November, 1998.

Within the framework of the program that is called "Documentation by Initiative," the Archive are involved into making a photo-, audio- and video-chronicle of major events in the space activities of the country.

There are more that 16,000 units related to private collections. The RGANTD stores private archives of outstanding leaders of the domestic space industry - colleagues of S. P. Korolyov, Corresponding Member of the Academy of Sciences B. Chertok, Manager of the Red Star Design Office L. Doushkin, etc.