Here's a sample description of the main photo gallery. 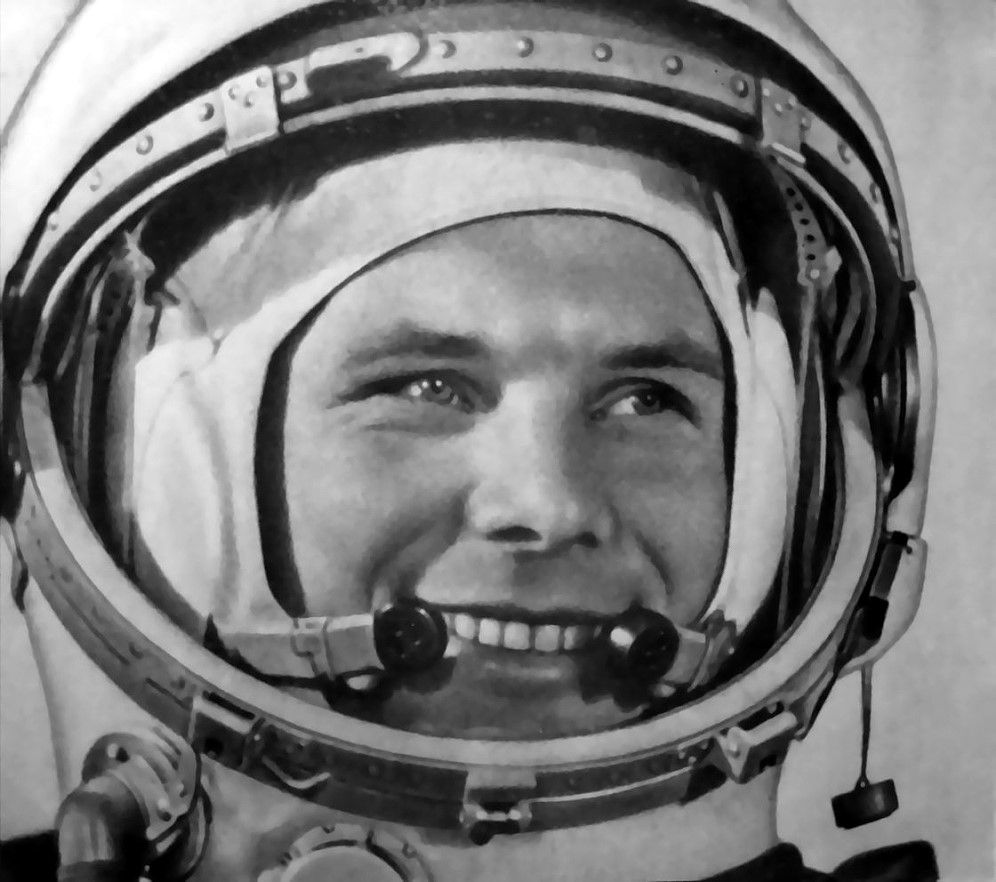 On April 12, 1961 the first earthling escaped the gravity well of planet earth. In the spaceship Vostok 1, Senior Lieutenant Yuri Alexeyevich Gagarin orbited earth one time at an altitude of 187 3/4 miles (302 kilometers) for 108 minutes at 18,000 miles an hour. He was the first man to see that the earth was indeed round, indeed mostly water, and indeed magnificent.

But who was this hero that hundreds of thousands of people greeted in the streets? How was it that he alone was chosen to break the barrier of gravity, to "go where no man had gone before"?

Yuri was born on March 9, 1934 in Klushino, a small village 100 miles west of Moscow. His father was a cabinetmaker, carpenter, bricklayer, and farmer, and his mother was a milkmaid. Together they worked on a kolkhoz or collective farm. By Soviet social standards, his heritage was impeccable. He was the third of four children. During the war, the Nazis threw his family out of their home and took away two of his sisters. Yuri helped his parents dig a dugout where they lived untill the war was over, then the family moved to Gziatsk.

When he was a teenager, he witnessed a Russian Yak fighter plane make a forced landing in a field near his home. It was just returning from battle, its wings bullet-ridden. When the pilots emerged covered in medals, he was extremely impressed. As he later recalled,

"We understood immediately the price that had to be paid for military decorations. We boys all wanted to be brave and handsome pilots. We experienced strange feelings such as we had never known before."

He completed six grades of secondary school where he studied mathematics, his favorite subject, and physics, then went to a trade school where he became a foundry-man. At the same time he read Longfellow's Hiawatha and the works of Victor Hugo and Charles Dickens, as well as the works of the Russian rocket pioneer Konstantin Tsiolkovsky (1857-1935).

After a year and a half at the trade school, he joined a four-year technical school in Saratov. In his fourth year at school he was offered the chance to join a flying club. And so began the realization of his dream to become a pilot. He took his first solo flight in 1955. He was frequently praised for his ability to handle a plane and his skill in making a smooth landing; "He'll make a wonderful pilot," his instructor and mentor Dmitry Pavlovich Martyanov said.

At the advice of Martyanov he joined the Soviet Air Force and went to Orenburg Aviation School where he learned to fly MIGs. While at Orenburg attending a dance held at the school, he met the lovely and shy Valentina Ivanovna Goryacheva.

Valya, a nursing student, was the youngest of six children. She would comment to her mother, "He has sharpened his teeth on the granite of science. He's been going to school all his life." Together they enjoyed reading and frequenting the theater and especially discussing what they had seen and read. They shared the news of Sputnik's historical flight and of Nikita Khrushchev's announcement of sending a man to space as soon as conditions were right. From moment he learned about Sputnik, Gagarin secretly knew he would join the space program and even began sketching his ideas for spaceships. He had studied Tsiolkovsky's theories on space flight.

In November 1957, at the age of 23, Yuri graduated with top-ranking honors from Orenburg and became a lieutenant in the Soviet Air Force. It was also on this day in his new officer's greatcoat that he married his beautiful Valya. Later, cosmonaut team leader Karpov would say, "Yuri felt calm, confident, cheerful, and optimistic. Valya is wonderful! In helping Yuri get ready to leave, and in seeing him off, she displayed extraordinary self-control and courage "like a genuine cosmonaut's wife."

His first post as a fighter pilot was at a Soviet Air Force base in the arctic, where his first flights were made in the light of the aurora borealis. While he was stationed there, the Soviets launched Luna-3, which photographed the far side of the moon for the first time. It was 1959.

"I mustn't delay any longer. A manned space flight will be made before long!"

He submitted his request to be considered for cosmonaut training, and, of course he was approved. He and Valya and their beautiful daughter Lenochka moved to Star Town built just for the cosmonauts outside Moscow.

Yuri was subjected to extremely rigorous training: physical, mental, and psychological. He underwent long periods in a sensory deprivation chamber, experiments with weightlessness, endurance in heat chambers, and test flights under stress with every reaction monitored. One test was to solve difficult mathematical equations while a loudspeaker blasted out answers. He was calm, resolute and always had a sense of humor and he always finished at the top. His fellow cosmonauts described him as: "fit comrade, never loses heart, a man of principles, bold and steadfast, modest and simple, decisive, a leader."

A fun-loving man, Gagarin coupled his strenuous training with periods of relaxation, and, like his work, gave 100%. He loved the outdoors and enjoyed swimming, fishing, camping, hunting, and the company of good friends. And of course he loved cars.

He was devoted to his family, and they were never far from his mind. He mentioned during one test flight while experimenting with a golden sphere, "Here I am, a grown man and a prospective cosmonaut, playing with a golden ball and holding a little flask of water to drink from. If only my little girl could see her daddy with these toys." It was during this very flight that he first witnessed water weightlessness. He described catching the spherical drops of water "in his hand, like butterflies."

He was devoted to his family, and they were never far from his mind. He mentioned during one test flight while experimenting with a golden sphere, "Here I am, a grown man and a prospective cosmonaut, playing with a golden ball and holding a little flask of water to drink from. If only my little girl could see her daddy with these toys." It was during this very flight that he first witnessed water weightlessness. He described catching the spherical drops of water "in his hand, like butterflies."

When word came that Yuri was the cosmonaut chosen to attempt the dangerous voyage into outer space, he and Valya talked all night. With trembling lips she asked him, "Why you?" By morning she would say, "If you are sure of yourself go. Everything will be all right."

His second daughter Galochka, "breath of spring," was born in early 1961. On the last day at home before his historic flight, while Valya was shopping for last minute things, he told of changing Galochka's diapers and jokingly telling her, "What a thoughtless child! Her daddy is about to go up in space, and she dirties her diaper!"

Chief Designer Korolev, the head of the Soviet space program and the man who had chosen the first cosmonaut, was especially fond of Yuri:

"During the days of preparation for the launch, when everyone had more than his share of concerns, apprehensions, and anxieties, he alone seemed to keep calm. More than that: he was full of good spirits and beamed like the sun."

Korolev would also comment later, "A good pilot is one who, in one minute of flight, can make enough observations, and draw enough conclusions, to keep an entire institute busy with them for a whole year. A bad pilot can fly for a whole week but only obtain enough information for an hour's work. What pleased us so much about Gagarin was that in 108 minutes he was able to see a great deal and enrich science with valuable information and conclusions."

Read excepts from Yuri Gagarin's statement before his flight.

Following his return to earth, Yuri's triumphant walk through Red Square in front of a crowd of hundreds of thousands made him more nervous and afraid than his historic flight. As he reached the podium, the awaiting Valya tearfully whispered in his ear, "Our dream has come true, Yuri." Embracing her he replied, "You're a smart girl! Thank you!"

He embarked on a world tour with Valya as an ambassador of good will. And everywhere they traveled, Yuri was decorated with the highest honors. He became a deputy of the Supreme Soviet, always continued to help and advise his fellow cosmonauts, and was appointed Commander of the Cosmonauts' Detachment.

He and Valya and their daughters enjoyed a life of privilege, but finally, his celebratory role began to wear thin. Yuri wanted to get back up into space. " being a cosmonaut is my profession, and I did not choose it just to make the first flight and then give it up." In 1967 he began training for the first Soyuz flight.

However he never reached the stars again.

On March 27, 1968, at age 34, Yuri Gagarin was killed when the jet he was test piloting crashed. His death was mourned by the world, as his ashes were buried alongside other Soviet heroes in the Kremlin Wall.

In honor of his great contributions to space exploration, a crater on the moon was named after him.

In July of 1971, the astronauts of the Apollo 15 mission visited the moon and left behind a plaque in memory of the 14 men, Russian and American, that had died leading mankind into space. Yuri Alexeyevich Gagarin had made his mark on history.